<< Back to all book recommendations 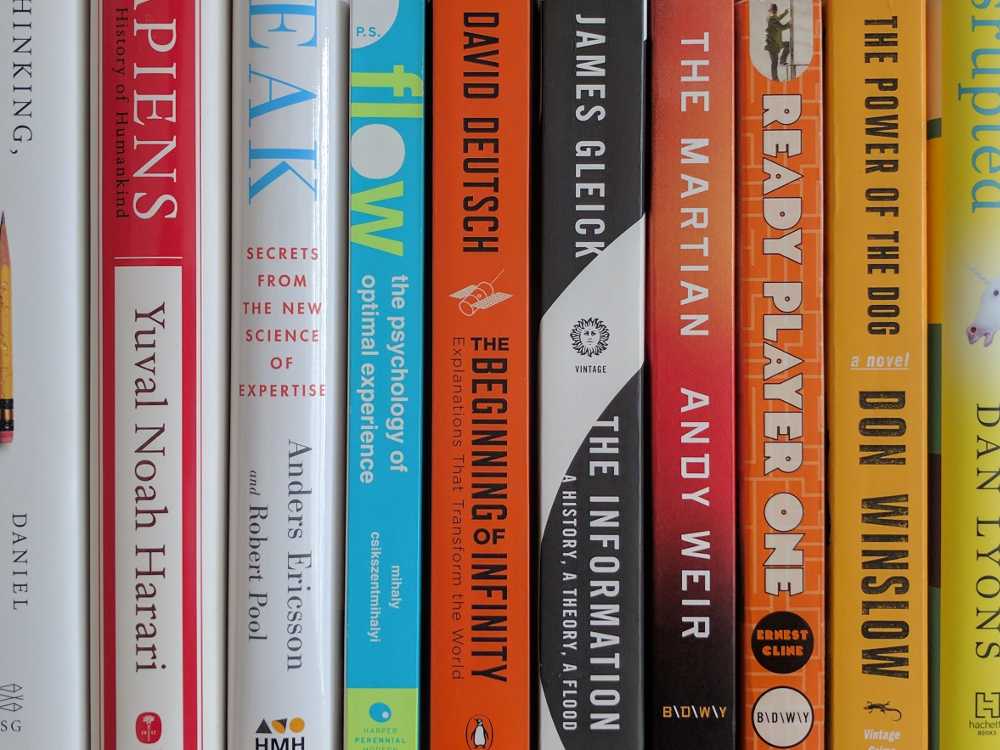 Some of the best books I’ve read in my life were those I read in 2016. Here are my top picks from the past year.

I don’t know why I waited so long to read this classic from Mihály Csíkszentmihályi. Maybe it was for the better because my experience over the last two decades aligned with research from the book: trying to improve whatever you do and immersing yourself in body, mind, or social activities will lead to the flow state (being in the zone). That, ultimately, results in happiness.

The Beginning of Infinity

This one is hard to summarize. The central theme is explanations and how they hold power to change and influence, ultimately opening the door to infinite progress. David Deutsch does an excellent job of tying physics, math, culture, creativity, and philosophy under the same umbrella. The book is dense; you’ll have to stop and ponder many times while reading it. However, if you love science, this will be one of the best books you will read.

These two short books pack practical advice and simple steps for pursuing your artistic side. I was delighted by how concise and honest they are. I have nothing else to add. Just read them.

Gary Vaynerchuk is a known figure among digital marketers and many tech workers. His #askGaryVee book is a compilation of questions he was asked over the years. Although I don’t agree with all his answers, the majority of them are illuminating, helpful, and sometimes even merciless in getting to the core of the problem. I would certainly recommend an audiobook version because Gary narrates the book himself. His energy and passion will pour out of your headphones.

James Gleick masterfully writes about the history of information: from oral communication and African drums to encoding of information and the birth of computing. I enjoyed The Information as much as a good thriller. The book is accessible to everyone, but geeks will get a kick out of it.

The best interface is no interface

Golden Krishna’s well-written rant should be renamed to “If you’re thinking about creating a new screen-based interface, think again.” I believe that it’s impossible to have no interface. The simplest way we communicate–speaking and hearing–is an interface consisting of air pressure and information encoding. That said, Golden has a point: creating a new screen-based interface for every new feature we think of is not solving a problem, it’s being lazy. Understanding person’s needs and addressing a problem in a way that will not add friction is hard work, but it is the ideal we should strive for every time.

In short, it’s about how social networks, smartphones, and robots affect our emotional lives. From the author’s website:

[The book] is the result of MIT technology and society specialist Sherry Turkle’s nearly fifteen-year exploration of our lives on the digital terrain. Based on interviews with hundreds of children and adults, it describes new, unsettling relationships between friends, lovers, parents, and children, and new instabilities in how we understand privacy and community, intimacy and solitude. […] Technology promises to let us do anything from anywhere with anyone. But it also drains us as we try to do everything everywhere. In a surprising twist, relentless connection leads to a new solitude. We turn to new technology to fill the void, but as technology ramps up, our emotional lives ramp down.

Peak: Secrets from the New Science of Expertise

Anders Ericsson is a researcher of expert performance and Peak is his popular science book that summarizes decades of his work. Malcolm Gladwell used some of that research for his bestseller Outliers and propagated the idea of “10,000 hours to mastery” (which is not really true). If you’re into learning and self-improvement, you’ll love this book.

Sapiens: A Brief History of Humankind

Describing the history of humankind in 400 pages is a daunting task, but Yuval Noah Harari takes it head on. He starts with the idea that “Homo sapiens rules the world because it is the only animal that can believe in things that exist purely in its own imagination, such as gods, states, money and human rights,” and then dives deep into transformative events and discoveries in our history. Part enlightening, part disturbing, I assure you this book will change how you see our existence in this world.

From an older version of the author’s page:

For twenty-five years Dan Lyons was a magazine writer at the top of his profession – until one Friday morning when his editor at Newsweek told him that his job as technology editor no longer existed. HubSpot, a Boston tech startup with a kooky culture, offered Dan a pile of stock options and gave him the vague title of “marketing fellow.” What could possibly go wrong? In a word, everything.

Mixed in with Dan’s uproarious tale of a job from hell is a trenchant analysis of startup culture and a poignant, painfully honest account of being middle-aged and struggling to pursue personal reinvention. Disrupted has been hailed by critics as a book that will make you laugh, but also will make you think.

The autobiography of Arnold Schwarzenegger surprised me. Whatever you may think of him as a person, his successes are noteworthy. He was the undisputed bodybuilding champion. He became a successful real estate businessman. He started an acting career without any qualifications and then raised to the top where he managed to gross $20-30 million per movie. He transitioned to politics where he ended up as a governor of California. Today he wins the Internet through social media and drives a WW2 tank for charity. Any of these accomplishments would be enough to call someone successful, but achieving all of them is astounding. The book is about his journey, but most of all, about cultivating a growth mindset.

Living with a SEAL

People who feel they are stuck in a rut talk to a friend or try a different hobby. Not Jesse Itzler. Jesse decided to hire an ex-SEAL to bring some novelty into his life. The deal goes like this: “come live with my family and me for a month, and I have to do whatever and whenever you tell me to do.” The month-long diary is both hilarious and inspiring, and hopefully will motivate you to step out of your comfort zone.

Algorithms to live by

Have you ever wondered how many people you should interview before hiring, or how many apartments to explore before renting? How about the best way to sort books and socks? Or is choosing between your favorite meal and trying something new your daily struggle? These look like uniquely human problems, but they all have analogies in the world of computers. Thankfully, computer scientists have been solving them for decades, and Brian and Tom wrote a delightful and approachable book where they share those ideas and solutions.

The science fiction story of Mark Watney getting stranded on Mars after a freak space accident is known worldwide. “The Martian” movie had 7 Academy Awards nominations, but it doesn’t come close to the novel when it comes to suspense, science details, and Mark’s witty jokes. If you didn’t watch the movie, please pick up the book; you won’t regret it. I read it in one day.

Life is harsh and the world is an ugly place in 2044. The only safe space is a virtual world named OASIS where the majority of people spend their time. Teenager Wade is always plugged in, and he is trying to solve puzzles left by the creator of OASIS that would lead Wade to immense power and wealth. The puzzles are full of references to 80s pop culture, so even though the book is for everyone, those 30 and older will feel at home.

After reading the book, I wrote a short piece comparing the world from the book and our current tech progression and trajectory. It turns out the book is not so sci-fi after all.

The Power of the Dog

The story follows DEA agent Art Keller in his fight against Mexican cartels from the mid-70s to late 90s. The thriller is hard to put down, but even better than the author’s masterful writing is how he follows and explains real world events in the drug trade across Americas. The best history and geography lesson on the topic I ever had.