<< Back to all book notes

Positioning: The Battle For Your Mind 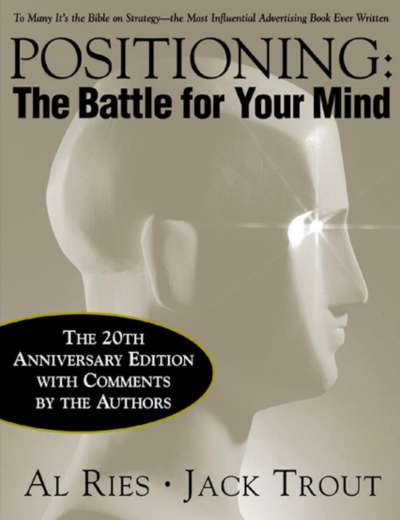 What positioning is all about

The book is about positioning a product or a service in marketing and advertising.

We, as a society, are already over-communicating with marketing and advertising. In addition, there are so many new books every year, newspapers, TV, radio, … How much can one person consume? We create more than anyone could consume comprehensively. Laws, new products, it’s all the same. Super- and hypermarkets. Sensory overload. Beyond a certain point, nothing can come in.

The mind accepts only what matches prior knowledge. The message has to be simple, even oversimplified. Instead of focusing on the reality of the product, you focus on the perception of the recipient of the message (the prospect). Use existing concepts in people’s minds because it’s almost impossible to create something new.

Getting into the mind

Be the first. People remember the first of everything and rarely the second. The highest mountain peak in the world? What about the second? The first person on the Moon? The second? And so on.

The first product to get into the mind has an enormous advantage. Xerox, Polaroid. For positioning, it’s better to be a big fish in a small pond than a small fish in a big pond.

You see what you expect to see because we are emotional and not rational:

Advertising heightens expectations, and you experience them when you try the service and product.

Because we face too many products and products, we are often confused and tend to over-simplify. We keep product and brand ladders in our mind to make things simple for ourselves. The ladders have up to seven steps, some only a few.

Companies often advertise in a vacuum and don’t think that a competitor is already positioned somewhere on the ladder. As a result, displacing a competitor will be hard or even impossible.

Creating a new ladder by introducing a new product category is also hard, especially if the new ladder is not positioned next to an old one. A solid position can be created by stating what a product is not. A horseless carriage, sugar-free soda.

Avis campaign against Hertz: “We’re second, so we try harder.”

Seven Up against Coca-Cola and Pepsi: “Un-Cola”

How to become the leader in a category?

Get there firstest with the mostest.

The power law applies to leaders regarding market share and total revenue. The winners will take the most because customers will likely pick the same brand for their next purchase, solidifying the brand’s position. It also creates a positive feedback loop. It’s the same for stores because they will stock the inventory with products by leaders.

Big companies and leaders think it’s the company and its creativity responsible for the product’s success. However, companies often fail despite enormous resources when they launch a new product in an adjacent category.

Short term, the leaders are almost invulnerable. Their worries are long-term, 5 to 10 years. Leaders should use their short-term flexibility to solidify their long-term position.

You must build the leadership position on your prospect’s terms, not your own terms. To do that, go with “the real thing.” Example: “Coca-Cola is the standard by which all others are judged.” Everything else is the imitation of the real thing. “We invented the product” by Xerox and Polaroid.

A huge danger is when leaders read their own advertisements and become complacent because they think they can make no mistakes. The illusion that the power of the product is derived from the power of the organization; it’s usually the reverse.

It’s hard and dangerous to move an established position into another category. Here is an example. Ivory was a soap brand. When detergents came, there was pressure to go with Ivory Detergent. However, that would entail moving the position of Ivory in the prospect’s mind. Instead, Tide was introduced and was enormously successful. For dishwasher detergent, P&G went with Cascade. Joy, Crest, Pampers, and Bounty are other examples. No Plus, Ultra, and similar additions.

External change often kills leaders because the environment changes, and the company’s mindset doesn’t shift. Changing the name of the company or organization can help with the shift because people often take names literally.

A follower should not catch up with leaders by offering the same thing and saying, “We have it too.” The leader can always play “the real thing” trump card. Instead, the follower must find a hole with an unmet need and a potential for unique positioning.

Volkswagen Beetle, “Think small” slogan. It created a unique position because it was very different from the prevailing thinking at the time about bigger being better.

High price positioning. The most expensive perfume or watch in the world. It can also work for cheaper and regular products. What is critical is having a good story to back up the price. Otherwise, it just turns people away. Furthermore, the place to establish the price is in the ads, not in the store; there should be no surprises in the store.

Other dimensions for positioning are gender, age, time of day, distribution, and heavy user (“The one beer to have when you have more than one”).

Don’t try to be all things to all people. Find a niche. Never go head-to-head with the leader. Over and under, yes, but never head-to-head.

If everything is already taken, repositioning a competitor is a viable tactic. Here is an example for potato chips. Bordon’s Wise, a competitor to Pringles, ran an ad listing the major ingredients of both products. The competitor had three (potatoes, salt, and vegetable oil), while Pringles had many more, and some sounded ominous. That ad repositioned Pringles as a less healthy or tainted option.

Here is another example of repositioning. The name of the replacement product is mentioned at the very end:

For millions who can’t take Aspirin. If you stomach is easily upset, if you have an ulcer, if you suffer from asthma, allergies, iron deficiency and anaemias. Check with your doctor before taking Aspirin because it can have these adverse effects (listed in the ad). Luckily, there is Tylenol.

The power of a name

The most important choice for the product. The name should clearly indicate the product’s major benefit, like Head & Shoulders. On the other hand, the name shouldn’t come so close to what the product does because it might become generic, like “Lite” in beers. It might become a generic name in that class of products if it’s too generic.

Confusion in names, in competitors (Goodridge and Goodyear) and in adjacent industries (Corning glass and Corning fiberglass). Even though many resist it, it’s best to change the name. Exxon changed its name from Jersey Standard.

The free ride is when the name of a new product is a composite containing the company name or the name of the more established product. That approach is easy to rationalize because the thinking is that the more famous brand will help the new product. Marketing expenses can be lowered too. However, it messes up positioning in the prospect’s mind and can even hurt the original brand.

A name is like a rubber band. The more you stretch it, the weaker it becomes.

Line extensions sometimes make sense, so it’s not all black and white. However, one should be careful with this approach and think twice before borrowing or extending names.