Buy groceries, reply to emails, pick up the package from the post office, organize the weekend trip, revise the insurance premium. The list is like a hydra: I cross off one and two more appear. It is, of course, my personal “to do” list. No work, no side projects, just stuff that needs to be done for life to proceed in a regular way.

I winced every time I glanced at the list. If I finished the first couple of tasks–and this is usually all I could do in one day–I would get no sense of accomplishment because dozens of uncompleted tasks would stare back at me and remind me I will never attain the peace of mind.

Why was just looking at the unfinished list bothering me? I couldn’t pinpoint the problem until I heard about the Zeigarnik effect. Named after the psychologist who first studied it, the Zeigarnik effect shows that people will think more about uncompleted or interrupted tasks than completed ones.

A study done by Greist-Bousquet and Schiffman (1992) provided evidence for the Zeigarnik Effect. In this paper, the authors stated that there is a tendency or “need” to complete a task once it has been initiated and the lack of closure that stems from an unfinished task promotes some continued task-related cognitive effort. The cognitive effort that comes with these intrusive thoughts of the unfinished task is terminated only once the person returns to complete the task.

Some people have criticized the effect. It turns out that it is not as strong, and sometimes even negligible if people are not motivated enough to finish a task. Since my list was what I wanted or needed to do, the effect on me was strong and was wearing me down.

If I avoided the list for a while, I eventually forgot my ongoing obligations. I didn’t have anything on my mind, and that resulted in serenity. However, every time I looked at the list, it reminded me of all the things I needed to do, and I started to worry.

I decided the problem needs to be solved. It was taking too big of a toll every day to let it run loose.

So, what was the cause of the problem? Too many items in a list that I would never do in one day. I was thinking about separating the list by size and priority into smaller buckets, but I would still have to reference the buckets frequently and spend extra time on managing items between them. It seemed like that wouldn’t work for me.

When I scanned the list again, one thing became apparent: only a tiny fraction of items had to be done that day, while a significant chunk couldn’t be done soon at all. The items I couldn’t do were dependent on future events, bigger blocks of free time, or actions of other people. For example, I couldn’t revise my insurance premium until I received additional information from someone, or I couldn’t research something until the weekend when I would have more free time.

The realization that most items are time bound shifted my thinking from “buckets” to “a timeline.” What if I could hide items on the list and they show up only when I could do something about them?

I started to shop for a tool that would allow me the workflow I had envisioned. At the same time, I wanted to keep it as simple as possible and not introduce too many new products or services.

The only digital destination I visited every day was my private email inbox. I was receiving a small enough number of emails per day that it was manageable, but I had no idea how to add new items (except emailing myself which I don’t like to do) or temporarily hide existing ones.

One of the potential tools was Inbox by Gmail. I had tried it once before, but we hadn’t clicked together. I remembered it had the option to add reminders as standalone entries or to existing emails, and it was possible to snooze any item in the inbox. Snoozing is especially interesting because it would address my timeline problem. I decided to try it again with a different mindset. 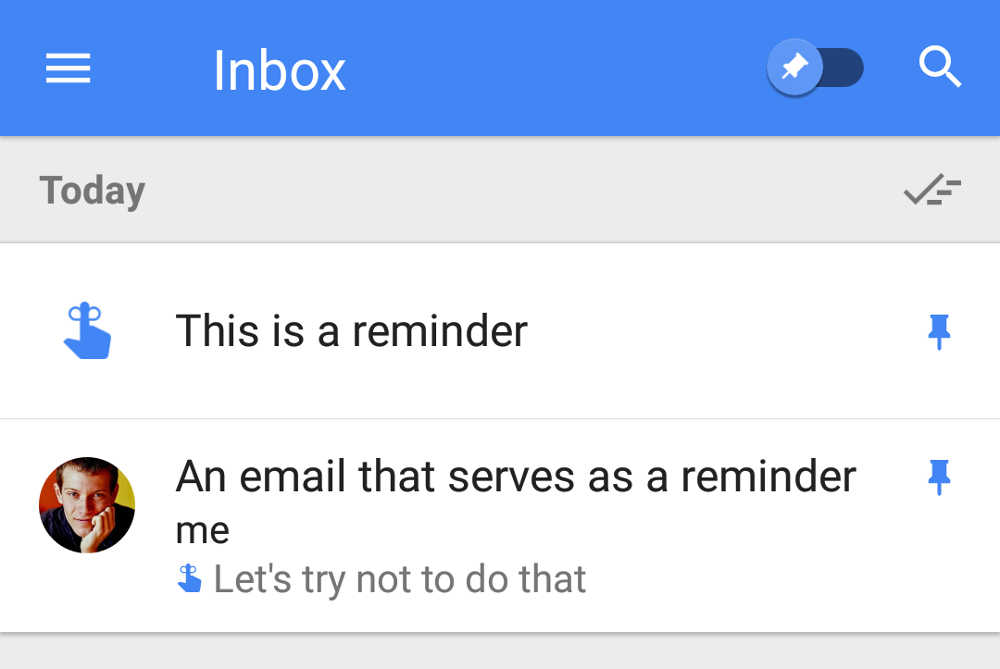 I won’t dwell on Inbox or its features here because I’m more interested in the process. You can check this nifty introduction video for Inbox to see how reminders and snoozing work. The important thing is that it finally allowed me to handle my TODO entries as I wanted.

The process is lightweight and fast. The result is that things pop up only when I can do something about them and that most of the time my list is empty. This emptiness, the lack of an endless and ever-present TODO list, finally released me from the Zeigarnik effect. I often open the app only to find nothing in it, and that makes me relax a bit. I don’t have anything urgent to do, and I can turn to more important things in life.

Don’t miss this one:
What can artificial intelligence and deep learning do?