Qualities and strengths of an outsider

I celebrated my second anniversary at Google the other day. The question often comes to mind on what do I, a person from a developing country in Eastern Europe, really bring to the table. Many people working here come from top universities, win programming competitions, speak three languages fluently, were running successful start-ups and got acquired, wield an incredible talent, or have world-renowned companies in their CVs. I can’t relate to any of these, so I always wonder how I got in and whether I’ll be caught as an impostor.

Living in the Western world provides access to opportunities, experienced mentors, and information. You could argue that Internet levels the playing field for information access, but there are infrastructural and linguistic barriers that hinder the access that I’ll talk about a bit later.

To my delight, I found an answer to the opening quandry. There are qualities people from less well-off countries are uniquely positioned to develop and grow: tenacity, resourcefulness, empathy, humility, diversity.

Let me try to give an example for each.

Note: I understand that I write this as a young white male with a college degree and that, due to a combination of historic, cultural, and social circumstances, makes me privileged in today’s world. I won’t feel or experience hurdles that people in different situations or with different backgrounds might. That being said, everyone compares themselves to people around them, so this is, for better or worse, something that’s going through my head right now.

In Croatia, technology always lagged a bit behind the West. It’s not a rich country and most people have to cope with less. Sometimes it’s an older machine or a slow Internet connection. And while most of today’s popular consumer technology is built in a technologically advanced US West Coast bubble, it is consumed in less favorable places with slower connections, worse infrastructure, and lacking services.

But we consumers somehow go around limitations and find solutions to problems. The solutions are often hacky and crude, but most of the time they work. That constant struggle can wear you out or it can build tenacity and resourcefulness.

One interesting example was covered by Vice recently.

Wikimedia and Facebook have given Angolans free access to their websites, but not to the rest of the internet. So, naturally, Angolans have started hiding pirated movies and music in Wikipedia articles and linking to them on closed Facebook groups, creating a totally free and clandestine file sharing network in a country where mobile internet data is extremely expensive.

Illegally pirating movies aside, it shows creative solutions in face of overwhelming odds.

Access to information is always limited due to language. Many native speakers of English, Spanish, French, and other widespread languages often take it for granted, but if you speak something that is only understood by less than 1% of the world’s population, you have to learn another better-known language if you want to expand your horizons. My current life situation wouldn’t be possible without understanding English and it was like that long before I moved abroad.

While people of widespread languages might rationally know that there are other languages in this world, they don’t really feel it. And why should they? Majority of people will understand them and all new information and knowledge is usually generated in their languages.

Unfortunately, this has unintended consequences. If you’re using global online services, of which many have been created in the West, only letters from the English alphabet are allowed, and sometimes Spanish or German. I received an offer from a huge international company boasting that it “gives me access to nine trusted brands in nearly 100 countries”, but that sure doesn’t seem like so if they can’t spell my name and business address correctly. 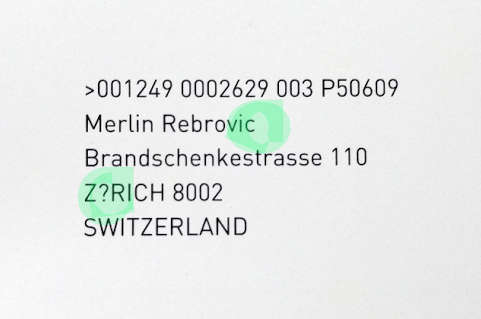 The same is true of this online bookstore that bills and ships internationally.

People from “minority languages” won’t make this mistake so easily. Their names have been tampered with too many times.

Trains, trams, and buses in Switzerland are renown to be on time, but it happens they’re a couple of minutes late sometimes. It’s always announced up-front and the delay is displayed on a screen.

Even then I’ve heard people complain how bad those delays are. I’m sure they either forgot or never experienced how bad it can get. Imagine coming to a station, no screen with waiting times and standing there beyond a reasonable amount of time any transport should have come. Waiting and not knowing when you’ll get to your destination. This was my Croatian reality for years, but even that is light years ahead of what I’ve heard from friends who visited or lived in India and some African countries. Or imagine the worst case scenario: not having access to public transport at all. In contrast to that, occasional short delays are not really a problem.

I remember visiting modern countries, like the US or Finland, for the first time. I was impressed by many things, but never jealous. It just demonstrated the situation back home can be improved. Now, when I live in Switzerland, I try to be thankful of the situation here. Living in a golden bubble can lead to a feeling of entitlement. Having experienced worse conditions makes cultivating humility much easier.

A different way of thinking is the greatest asset you have. This is something that I’ve experienced personally–people in my wider team come from different cultures on six continents (nobody from Antarctica, yet). Scott Page, a professor of political science and economics at the University of Michigan, analyzed how diversity in teams produces organizational strength.

People from different backgrounds have varying ways of looking at problems, what I call “tools.” The sum of these tools is far more powerful in organizations with diversity than in ones where everyone has gone to the same schools, been trained in the same mold and thinks in almost identical ways.

The problems we face in the world are very complicated. Any one of us can get stuck. If we’re in an organization where everyone thinks in the same way, everyone will get stuck in the same place.

But if we have people with diverse tools, they’ll get stuck in different places. One person can do their best, and then someone else can come in and improve on it. There’s a lot of empirical data to show that diverse cities are more productive, diverse boards of directors make better decisions, the most innovative companies are diverse.

“I want to argue that diversity – defined as differences in how we see the world, how we think about the world, how we try and solve problems, the analogies we use, the metaphors, the tools we acquire, the life experiences we have – make us better at what we do,” he said. […] Page said studies looking at authors of research papers and patents show similar results. For instance, the chance of writing a successful paper, defined as one that receives more than 100 citations, increases more than fourfold if it’s co-authored. However, Page said, it’s not the number of authors that counts, but the different ideas they bring to the table. Co-authors of similar ethnic groups received fewer citations, while co-authors from different universities had more, according to Page.

In his book The Signal and the Noise statistician Nate Silver says basically the same thing–diverse models and ways of thinking improve predictions. The caveat is that it has to be used correctly; diversity amplifies an outcome and it can go both ways.

The examples I mentioned are not the only ones, but they show that even if you have a non-ideal background, you still have a lot to offer. Yes, access to opportunities and knowledge gives a head start, but knowing your strengths allows you to play to them. If you’re playing the long game, your attitude and character will always prevail over skills you have at the moment.