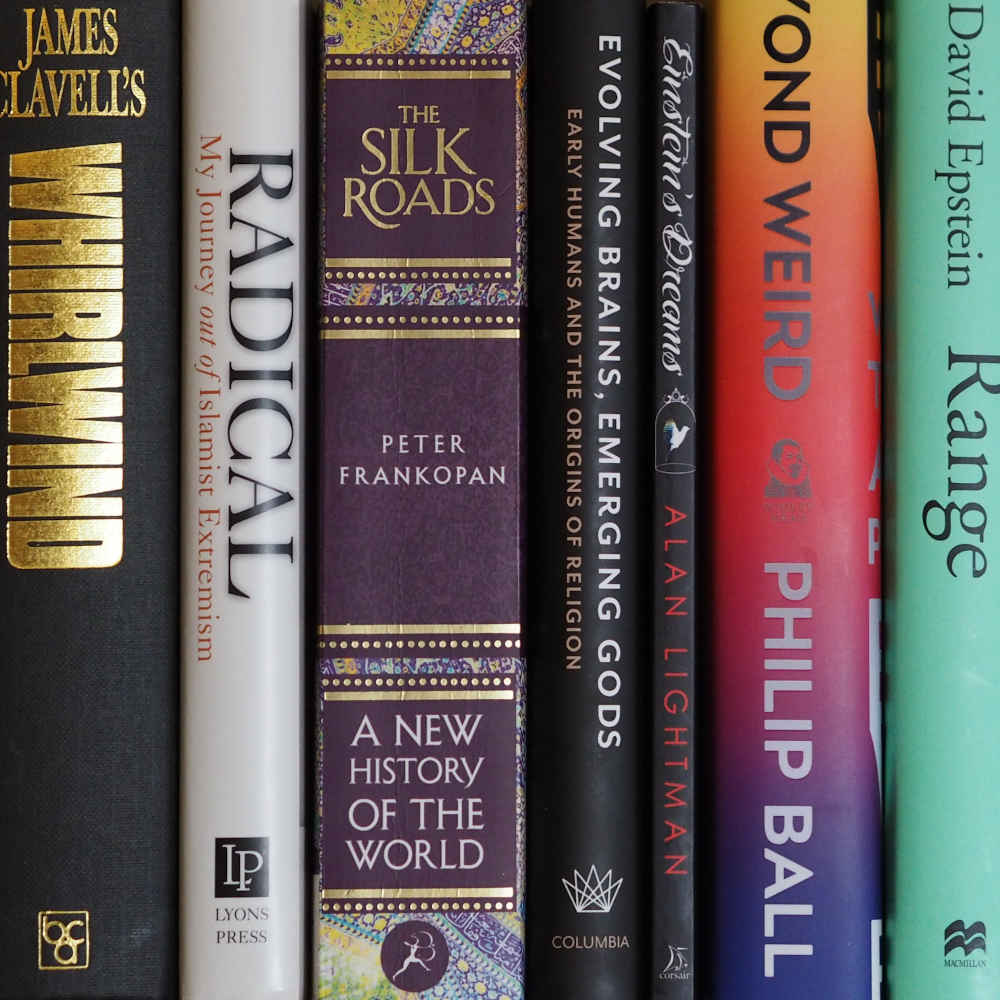 I’m noticing several trends in my reading habits over the years:

Here are my top recommendations from all the books I read in 2020.

Beyond Weird: Why Everything You Thought You Knew about Quantum Physics Is Different

Every time I encountered quantum mechanics, I could never wrap my head around it. After I found out there is a (somewhat) approachable book on the topic without any mathematical formulas by Philip Ball, I jumped at the opportunity to learn more. Mission accomplished–now I better understand why I don’t understand quantum mechanics. It’s a beautiful book that, in plain language, explains why the quantum world defies human intuition and why many call it weird. The book also goes through scientific progress in the field over the last hundred years and how some findings forced us to question our preconceptions of reality. On occasions, the book is almost like a thriller and full of surprises. Highly recommended if you like to read a section, close a book, and then think deeply about it.

The Righteous Mind: Why Good People Are Divided by Politics and Religion

I stumbled on Johnathan Haidt’s scientific work while reading Sapolsky’s Behave (last year’s recommendation) in the context of how political and moral differences between progressives and conservatives stem from different biological affinities. As I’m becoming more interested in the biological underpinnings of moral philosophy instead of relying on the rationalization of liberal or divine rights, I had to read Haidt’s work.

Evolutionary biologists have found adaptive challenges in all cultures and communities, like caring for vulnerable children or partnerships with non-kin to reap the benefits of reciprocity. The author has put the challenges into a framework of five moral foundations: care, fairness, loyalty, authority, and sanctity. In turn, the foundations were tested in several studies to show that progressives care mostly about the first two while conservatives care about all of them equally strongly.

A good companion book is Moral Tribes by Joshua Green (which references The Righteous Mind and is also referenced in Behave). It explores the biology and workings of the brain when contemplating justice.

How Democracies Die: What History Reveals About Our Future

Steven Levitsky and Daniel Ziblatt explain how democracy is not just about the right to cast a vote. Democracy is also about the attitude of people running democratic institutions and shared beliefs and practices that help make those institutions work. It’s easy to turn into or maintain authoritarian governments because they’re a stable equilibrium. Democratic governments are trickier because they’re an unstable equilibrium that can deteriorate at any moment. Only mutual toleration, forbearance, and unwritten rules of behaving beyond the bounds of law keep democracy alive.

E. Fuller Torrey puts forth a compelling theory that gods and religion are by-products of the evolution of a human brain, and not a historical whim of a group of people. As our brains developed over the last several hundreds of thousands of years, we became more capable and realized that our time as living beings is finite. The realization spurred thinking about the afterlife. The rest, as they say, is history. I found Evolving Brains Emerging Gods to be a good companion to The Denial of Death by Ernest Becker. The former is more about anthropology and neuroscience, and the latter about sociology and philosophy.

How To Be an Antiracist

I’ve picked up a few books about racism, but couldn’t force myself to finish them. The books either explore a cultural subset that is too far away from a culture where I come from, or they start with the premise “if you’re born white, you’re guilty,” which is a non-starter for a healthy discussion.

Ibram X. Kendi’s book is different. It explores many types of racism: ethnic, bodily, cultural, and class racism, to name a few. That approach disentangles the discussion about racism from focusing on a particular biological feature of a victim to an oppressor’s mindset and behavior (and how not to be one). The author also shares his story of fighting racism and realizing that he unintentionally exhibited racist behaviors during his journey.

I reflected a lot while reading the book about hidden and normalized systemic racism in my culture that was not as obvious to me before.

I was thinking a lot about adequately describing this captivating and unusual short novel by Alan Lightman. At some point, I realized it’s best to use the publisher’s description and reinforce it by my earnest recommendation to read the book: “Einstein’s Dreams is a fictional collage of stories dreamed by Albert Einstein in 1905, about time, relativity and physics. As the defiant but sensitive young genius is creating his theory of relativity, a new conception of time, he imagines many possible worlds. In one, time is circular, so that people are fated to repeat triumphs and failures over and over. In another, there is a place where time stands still, visited by lovers and parents clinging to their children. In another, time is a nightingale, sometimes trapped by a bell jar.”

Understanding Michael Porter: The Essential Guide to Competition and Strategy

I was delighted by Joan Magretta’s book for two reasons:

I tried to adjust my reading order this year so that books that are somehow related get closer to each other. I hypothesized that I’d be able to look at the same topic from several angles and spend more uninterrupted time with an idea to allow me to make better connections. Here is such one combo:

You can find lists of recommended books from all years on my reading and books page.